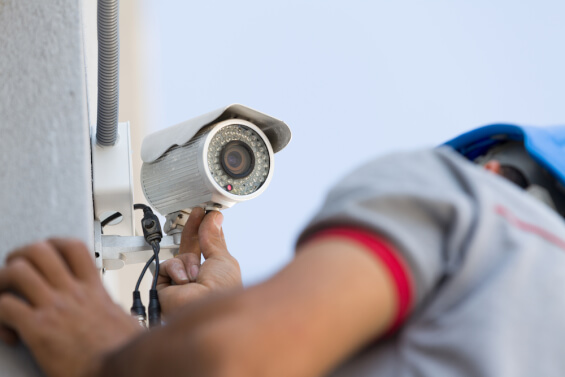 Being omnipresent, CCTV cameras run several risks. Such threats obstruct the cameras to perform basic functions of recording the occurrences in their vicinity. In this post, we have discussed six problems that even home CCTV cameras face and have given solutions to tackle them. Read on!

Vandalism refers to the destruction of the body of the CCTV cameras by miscreants. This translates to unauthorized dismantling of the camera, theft, breaking the camera, spraying paint on the viewfinder or obstructing its view. Cameras fixed on the outdoors are vulnerable to such damage when compared to indoor cameras. Cameras are hit with iron bars and are damaged beyond repair.

Cameras these days come with metal casings and housings fixed to them. These often look like cages which will disrupt access by vandals to the camera. These are further fixed to the walls firmly with screws and fixtures which will protect the camera’s body and lens from maltreatment and vandalism

Another way to protect the camera from vandalism is by fixing it at a high point, out of reach of such miscreants. Elevated positions on the property will make best spots for such fixtures.

In tropical climates like India where monsoons are a big problem, it is very obvious that the cameras are exposed to grievous damages like lightning, rain and thunder. The rain water might seep into the lens of the camera thus destroying it. If placed on an elevated platform where lightning can reach, the camera might be destroyed. If the camera is hit by lightning, it runs the serious risk of short circuit and might end up in a fire accident.

Firstly- plug off your cameras when there is a thunderstorm.

If you are living in areas where monsoons are longer and the rains are destructive, you will need to waterproof your cameras. This can be achieved by putting a plastic canopy over the camera. CCTV cameras also have waterproof bag systems made of plastic to save it from rain water. Shock absorbents when constructed within the camera will reduce the effects of lightning over them. Ensure that the metals on which you mount the camera are not conductors of electricity in which case they might attract lightning. The earthings and wirings should be properly insulated in times of thunder storms. If not, they might end up frying your system. Install lightning surge protectors which will control the shoot ups in voltage from exceeding a particular threshold.

We can all agree that CCTVs are an indispensable gift of technology. They provide evidence for events that unfold in front of them and help to prove the destructive activities of miscreants. The fact that most of the CCTV systems are becoming wireless adds to the bounty of gifts. But at the same time, it exposes the CCTVs to a larger risk for they work on network IPs that face the possibility of being hacked by the ill-intentioned. They can even be jammed by such people to disable their services. They might even decrypt your camera’s safety codes and gain access to sensitive footage.

Here is a technical solution to save your CTV from being hacked. You need to boost your network with a WPA2 which translates to Wi-Fi Protected Access 2, an advanced security protocol.

Keep your passwords on a cycle. Change them as a cycle changes. Do this frequently and not give time to hackers to passphrase your passwords. This will keep the memory of your CCTVs safe.

Sounds foreign? Well, nothing to worry about, a firmware is the program on which the IP security camera runs. It is similar to the software that your computer runs on. This is the framework that gets the camera running. However, the very firmware can become the reason for its damage. There is a chance that firmware is not regularly updated. Most of the time, we are either skeptical or find it inconvenient to update our firmware. This leads to several loopholes and becomes a threat to the stability and performance of your surveillance systems.

Ensure that your security systems are updated once in every two to three months. Enquire about the latest version available in the market and choose the best. Find a version that matches your model. Read up well before upgrading for choosing an upgrade that doesn’t suit the camera will lead to further technical conflicts.

Usually, security cameras are assisted with flood lights to enable night vision. Most of them are sheltered by canopies and are constructed in corners of a beam. Such nooks and crannies become spaces for growth of nocturnal bugs and insects. Most of them are drawn to light that the cameras emit. Thus, most of the cameras might create cobwebs that happen to stick to the cameras. They compromise image quality and trigger false alarms.

Use soft bristled brushes to clean these cobwebs on the exterior. Spray insect repellents which will ward off such insects. Spray them on the camera and not directly on to the lens. If the insects are raising false alarms by triggering your motion sensors, reduce the camera’s motion sensor sensibility.

At times, cameras are mounted in such a way that they are pointed towards reflective surfaces like ponds, mirrors, panels, windows etc. This will lead to glaring of the lens and will obstruct view of the camera. If the cameras are placed inside the house, they might create white washed images due to the several mirrors at home. This will defeat the very purpose of CCTV cameras as the faces of the people will not be recognized.

Ensure that the camera doesn’t face such reflective surfaces. Cover the lens partially and protect it from glare.

CCTVs are the all seeing eyes that will keep a track of all the happenings around buildings and spaces and keep the surroundings safe. It is now our duty to keep these implements safe from damage. Implement the solutions we proposed and keep your cameras safe.

Add Plants to your Home for a Lively and Calming Ambience

11 Ways To Wake Up to A Ultra Bright Morning Face

0
UrbanClap Editorial September 4, 2017
No Comments Yet